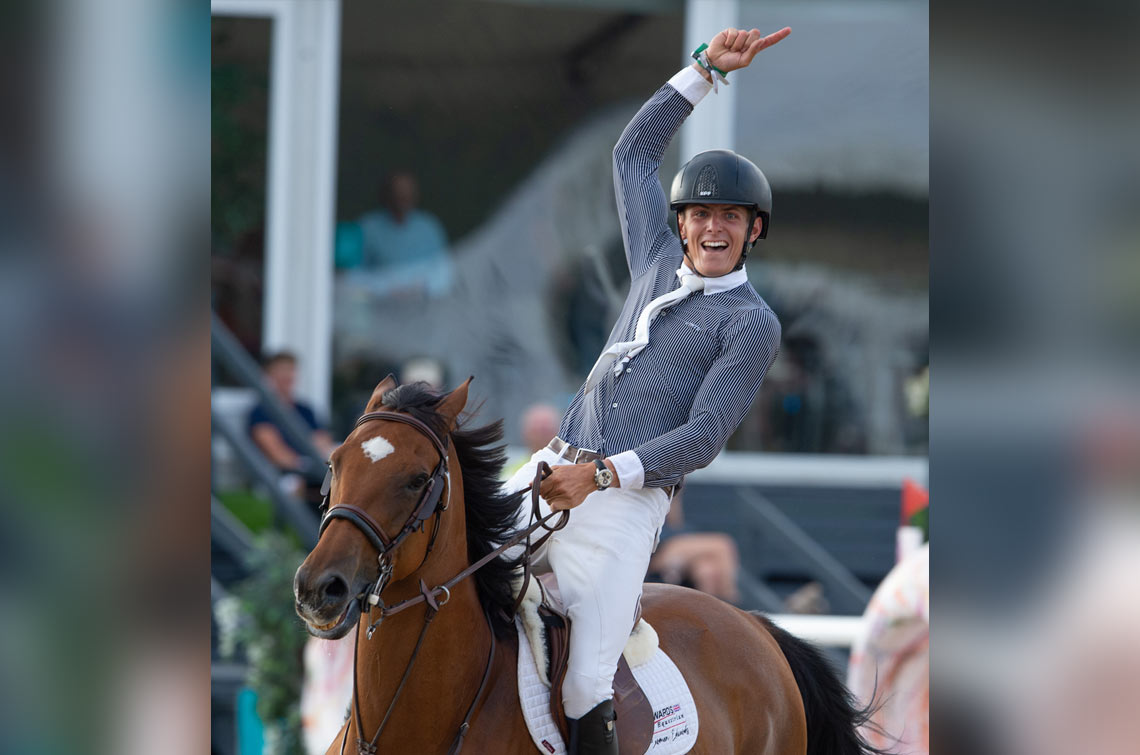 The 2022 edition of the Al Shira’aa Bolesworth Young Horse Championships delivered five phenomenal days of showjumping at its very best.

While the headline acts were the official British Showjumping Young Horse Championships, with qualifiers for the World Breeding Championships at Lanaken in September, the event culminated in an incredibly intense 2* Grand Prix, sponsored by Old Lodge Stud.

The final day hosted the Windmill Farm Estate 6yo and Al Shira’aa Farms 7yo Young Horse finals, which were won in tremendous style by Nicole Lockhead Anderson on Thomas Williams’ mare Chac Boys Centura Ps, and Olivia Gent on her own British bred gelding Brownheath Bodacious.

Then, saving the best ‘til last, Carmen Edwards on 10-year-old Happy Valerie, a mare owned jointly by his parents and Ian and Maddie Kellett, had a sensational last round in the Grand Prix to take the win ahead of Jack Whitaker by just half a second.

The Windmill Farm Estate 6yo final was the first big class of the day. Ninteen British-bred horses went through to the Jump-off, and Lockhead Anderson had three horses in the class, but it was Chac Boys Centura Ps who put her out front. “I went as fast as I could. Tom (Williams) said just go for it but make sure you’re clear. Luckily it paid off. I’ve been with Chac Boys since April she is so careful; she jumps every fence the same she’s got a very bright future and keeps stepping up. I’m very excited for Lanaken as I’ve never been.  Tom said we are going!”

The top British bred 6yo was Billy Mufsa, a mare from the Billy Stud ridden by Lottie Tutt.

Olivia Gent with her own British bred gelding Brownheath Bodacious won the Al Shira'aa Farms 7yo final a stylish and strong performance. Just four British bred horses were through to the jump off and Gent was out front early in the round. “It’s a fantastic feeling, the stuff dreams are made of. I just hoped I was fast enough. I’m very excited to be heading to Lanaken, especially with my own British bred horse. It will be a lot of pressure, but it will be a great experience.

A jubilant Carmen Edwards with Happy Valerie took no prisoners as he edged Jack Whitaker on Scenletha and stormed out front in the final class of the day to be held in the Bolesworth International Arnea, namely, the Old Lodge Stud CSI2* Grand Prix.

Fifteen riders returned to the ring to ride against the clock. Four on four-faults, two on single time faults and nine on clears. Whitaker, on his dad’s mare, was the fourth of the clears to ride in the final round. He looked uber-smooth and, with a time of just 38.16 seconds, looked like a cert for the win. However, it was not to be as the partnership of Edwards and Happy Valerie was sensational. They made every line, every turn work and cleared the last fence with a Grand Prix-winning time of 37.47 sceonds. This was the first-ever 2* win for Edwards, from Dudleston Heath, and it clearly meant the world to him and his family.

“It’s the most marvellous feeling. I’m struggling for words. It’s what I’ve always wanted. The atmosphere was great. The arena’s great. The jumps were fantastic. It was just so extra special as we had family and friends here.

“We produce horses for a living so to be able to keep her, and now achieve something like this today, it means that all that hard work has paid off and I’ve accomplished something big. She’s a very sensitive mare and we just understand each other. I know what ticks and what works for her.

“I can’t thank my mum and dad enough and, finally, I’d love to say thank you to Nina Barbour, because it is a home show, and also all my sponsors and everything, but we couldn’t live our lives if it wasn’t for her. She does a marvellous job.”

For further information on all events at Bolesworth, visit www.bolesworth.com/events